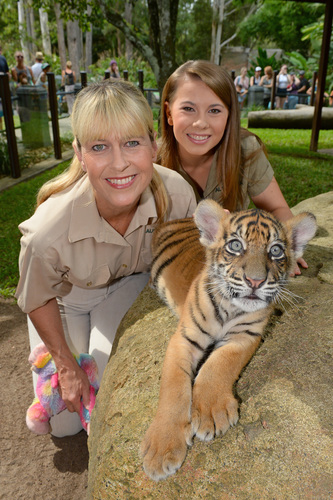 Scout and Delilah began guest encounters Tuesday April 12 where they act as ambassadors for their cousins in the wild. Encounters will support Wildlife Warrior’s Tiger 511 program where every donation of $5 saves one tiger for one day. The Tiger Protection and Conservation Unit in Indonesia are sponsored through the program and charged with the defence of the forest and protection of wild tigers from poaching.

With Scout’s name being sponsored by Scouts Queensland, Australia Zoo is thrilled that these partnerships will bring attention to the critical endangerment of Sumatran tigers and allow children and adults alike to contribute to the most successful tiger conservation program in Asia.

You could get the chance to see Scout as part of the Cub Centenary Celebrations occurring in 2016! Stay turned to the cub100.com website where you’ll hear about the Platinum Adventure at Australia Zoo competition later in the year which includes return flights from within Australia, transfers and two nights accommodation at Oaks Oasis on the Sunshine Coast.

Tim and Grace of the popular afternoon show Studio 3 on ABC 3 became Scouts for a day recently with members of the Victorian Branch at Gilwell Park. The episode aired on 12th April 2016, and here are some pics of what they got up to at camp. 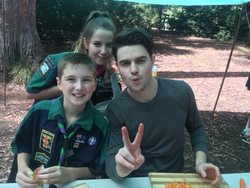 Tim prepares a meal with Scouts 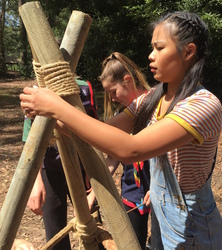 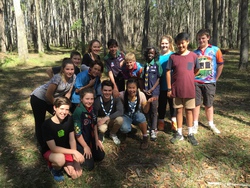 Tim and Grace joined by Scouts 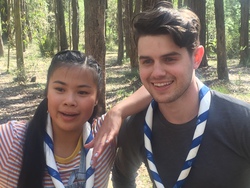 Watch the short section of Tim, Grace and Scouts on ABC3 below!

Record your Clean Up Australia Day Hours as Messengers of Peace Projects! 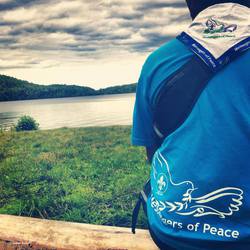 Scouts around the world are generating amazing projects to make a difference and create a better world. The World Scouting Messengers of Peace initiative collates the millions of hours Scouts give to their communities. 700 million hours have already been recorded worldwide, an achievement of which Scouting can be proud of!

As you’re aware, 2016 marks the 100th year of Cub Scouting! In addition to the dedicated Scouts Australia cub100.com website, a new World level initiative has been launched. Head to the WOSM Cub Scouts Centenary website to see the worldwide history of Cub Scouts, share your Cub event, and collaborate with users worldwide! Enjoy the celebration and Happy 100th Birthday to Cub Scouts! 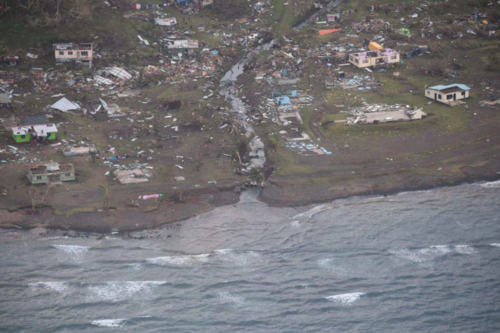 Cyclone Winston recently hit Fiji leading to 42 deaths and widespread devastation to many parts of the country. Scouting communities were also affected. The South Australian Branch is coordinating an appeal across Scouts Australia for their brother and sister Scouts in the most severely affected Scout Groups in Fiji. Please consider donating as a Group/Unit/Crew/Section or running a special program night with youth/families in support of this appeal.

Pictured at right is the destruction caused by Cycloe Winston.

Scout Central Program of the Month

Last year Australian Scouts Commemorated 100 Years since World War One in a variety of different ways.

For the Scout Central Program of the Month, we reflect on last years Commemoration and encourage Scouts of all sections to acknowledge ANZAC Day again this year in activity programming. You can take a look on Scout Central to see activities other Groups are using. Alternatively, refer back to last years program for your section which can be seen here on Scout Central.

Victorian Scouts can be congratulated for hosting, on behalf of Scouts Australia, an inspiring series of events for the World Scout Foundation during March, showing Australian Scouting at its best. World Scout Foundation Fellows and supporters are responsible for significant financial and other support of World Scouting, and are chaired by His Majesty King Carl XVI Gustaf of Sweden. The weekend included an inspirational leadership seminar with presentations by His Majesty, Dick Smith AC and Scott Teare the Secretary General of World Scouting amongst others. Their messages were strong and clear, that Scouting provides leaders who will benefit the whole community and as business moves to ‘three bottom lines’ - people, planet and profit - Scouting is perfectly placed to train leaders of the future. His Majesty joined over 7,000 Cub Scouts as they celebrated their centenary at Baloo’s Picnic at Melbourne Zoo, and presented 31 Scout Medallions to recipients at a special function.

Members from the Foundation congratulated Victorian youth members for facilitating vital roles in the success of the weekend and exemplifying a youth-led, adult-supported organisation.

The Asia Pacific Regional Office of the World Scout Bureau are conducting research around understanding the youth member needs and attitudes to the scout uniform. Does it make our Movement more or less inclusive? Do you feel proud wearing a uniform? What do you think about displaying your badges? Help World Scouting get a picture of how our youth members feel about wearing a uniform via the online survey.

Apply to be the next International Commissioner! 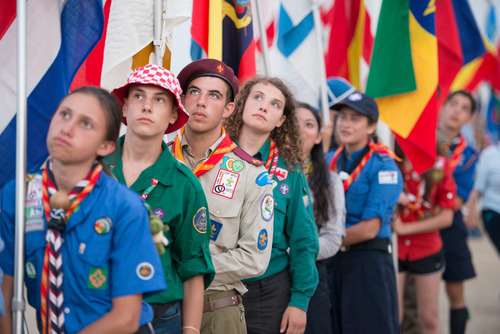 In recent years, international Scouting has been growing at an exponential rate.

As International Commissioner, there are endless and exciting opportunities to pursue, to help our youth experience international Scouting, and to support other National Scouting Organisations (NSOs), particularly in the Asia-Pacific Region.

You will lead a highly dedicated team of National Co-ordinators, Branch International Commissioners and Contingent Leaders. You will be the main point of contact with the World Organisation of the Scout Movement, primarily with the Asia-Pacific Regional Support Office.

Whilst the position can be very busy, it is also very exciting and stimulating ... realising our vision for international Scouting and contributing, through Scouting, to a better world.

Don't forget to keep checking Scouts Australia International website for international opportunities. Youth members have recently attended events in Oman, Singapore and Sharjah on scholarships. Contingents are travelling to Kandersteg (Switzerland) and Finland this year. Contingent Leaders have been appointed and planning is well underway for events in New Zealand, Iceland, Norway and Mongolia in 2017 as well as the next World Scout Jamboree in 2019 in North America.