Winner of the SC2.0 Competition Announced

After receiving hundreds of entries for the Scout Central 2.0 Competition, Scouts Australia has finally found a winner. Jacob, a Venturer from 1st Caringbah Scouts NSW, will take home the prize as the new owner of a GoPro Camera. 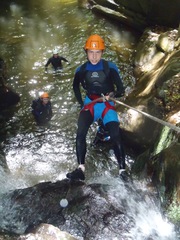 Jacob was elated upon hearing the news. "Thank you so much for the great news! I am very excited about winning this competition. The competition has also made me realise the potential of Scout Central 2.0, and how it can benefit Groups such as ours."

Jacob, an avid sportsman, said the GoPro Camera would be put to good use. "During July of last year, a GoPro, which belonged to my brother and I was unfortunately lost in the surf, and is somewhere out in the depth of the ocean. We were very upset at losing it, as we enjoyed using it. However, after hearing the news that I had won, I am excited to once again have a GoPro I can use. I think the first adventure with the GoPro will be our Venturer Unit’s Scuba Diving trip to Cairns in the Easter holidays. I am really looking forward to this adventure, and very happy that I now have an opportunity to keep and share the experience on the GoPro."

Marty Thomas, CEO of Scouts Australia, who picked the winner said that it was a hard decision as there were so many great answers; however Jacob's answer stood out.

"His answer just ticked all the boxes." Marty said. "It was the candid nature of his answer that I liked."

Jacob's answer to the question of what the most interesting feature of SC2.0 was and why he enjoyed it was:

"I have never really used or heard of Scout Central before, until I saw it in an email I think last December 2014. I attempted to log on, however, I wasn't sure of my member number, and decided to log on at the start of the new Venturer term. Doing so, I discovered some of the awesome features of the website, and what it has to offer.

As 1st Caringbah's Activities Coordinator on the Unit Council over the past 9 months, I believe SC 2.0 could benefit myself and the Unit in making our Venturer programs, as it has many brilliant, new, exciting and fun ideas to build onto our current Venturer program.

As well as this, it has opportunities to read and view information regarding upcoming events in Scouts, latest Scouting news and much more!

Other excellent answers included a Queensland Rover from Stafford Scout Group, who stated, "I like how SC 2.0 brings all the aspects of Scouting together. You can see what is going on in your community, district or state within Scouting, as well as seeing what training you are up to or needs to be done. It has helped myself & my Crew to gain more ideas for our program as well as assisting Crew members in finding the e-Learning that the Rovers need to do in able to continue on in Rovering."

"A huge compendium of new games and activities in one location. They are generally well described and all do-able for any Scout Group often with minimal new equipment. Being able to access a large number of games and activities from other states really expands our repertoire of great fun Scouting ideas. I also really like the concept of Adventures to help spread the word about trips and activities happening."

One thing certainly stands out from the answers received. Scout Central 2.0 is making both leaders and youth members' lives easier, more efficient and adding value to their Scouting experiences.